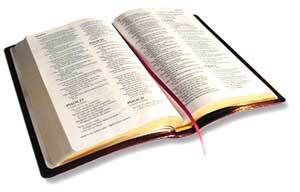 I firmly believe that the bible is the word of God. My study of different religions has led me to that conclusion. When one considers the countless documents and books written close to the time frame of Jesus, biblical archaeology, history, how it aligns with scripture, and biblical prophecy itself. It becomes clear that the evidence is far too overwhelming to arrive at any other conclusion. The purpose of this page is to provide resources that will build your faith and provide further evidence that some Christians may have not considered, or have known about. The idea is to increase your faith as you see the evidence and the resources for yourself.

It is important that you read the bible for yourself and learn what it really says. The good news is we live in the information age. You can read and study the bible for free and you can even download it to your iPhone, Android, windows phone, iPad, tablet, or just about any other portable device. You also have access to many ancient books outside of the bible. There are commentaries, concordances, and bible dictionaries that are now in public domain. You can read these online or you can download them to your computer.

As far as the bible goes you can read any version in any language for free with  You Version. Click on the start reading button to read the bible online without downloading. Some modern versions are protected by copyright, but you can still read the translation online. You can download the public domain versions to your computer or portable device.

There is another pretty good online site to read the bible. It has any version you want and it has the bible written in other languages. There are over 100 bible versions available. This website is called The Bible Gateway

There is a free program called e-Sword. It is a program that displays and allows you to study the bible. you can write notes and look at different versions in parallel. This e-Sword app downloads and installs to your computer. There is a version for portable devices like tablets, phones and apple products. e-Sword will also install in older computers. 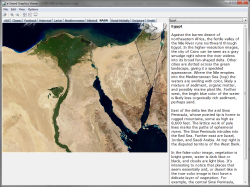 While there are many bible programs you can buy, e-Sword is unique in that it provides many plug-in modules for free. These modules are concordances, dictionaries, commentaries, maps, graphics, Hebrew and Greek Manuscripts, and even ancient books and manuscripts from people like Flavius Josephus. They are accessed and downloaded from within the eSword program. This entire library of books, maps, and manuscripts use to cost thousands of dollars just a few years ago. Now thanks to e-sword and the internet they are all free. 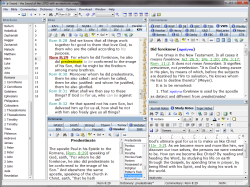 In addition to this e-sword also has a user community that creates their own modules. They assist each other in other areas too. The plug-in modules are a great feature. The user community is called Bible Support.

There is a great list of plug-in modules for free with this program. Other programs have plugin modules as well, but it usually comes at a cost. There are some modules you can purchase that plug into e-sword. These are third-party plug-ins with the most modern versions of the bible, or other works that are still under copyright. e-study/e-sword extra modules

E-sword is a powerful program and it has a users guide, Graphics viewer and maps, Strong’s tool tips, Reference Library, Powerful search engine, It compares bibles, and e-Sword even has audio sermons. There are ancient manuscripts that can be downloaded and added to e-Sword. There are also commentaries, concordances, and bible dictionaries that can be downloaded and added to e-Sword. All of this stuff is free and comes in the form of modules that can be added to the program once it is installed. Here is a list of just some of the free books and graphics you can access inside e-Sword.

The Pulpit Commentary is a homiletic commentary on the bible that was created in the nineteenth century lead by Rev. Joseph S. Exell and Henry Donald Maurice Spence-Jones. It contains 23 volumes with 22,000 pages and about 95,000 entries. It was compiled and written over a 30 year period of time with around 100 contributors.

Matthew Henry’s Commentary is a well-known six volume exposition of the Old and New Testaments and it was written between 1708–1710. This is a complete commentary that provides an exhaustive verse by verse study of the Bible. This commentary covered the whole of the Old Testament, the Gospels, and Acts in the New Testament. The work was finished after the author’s death by thirteen other nonconformist ministers. They worked on Romans through Revelation and finished this work partly based upon notes taken by Henry’s hearers. This six volume set was later edited by George Burder and John Hughes in 1811

Barnes was the author of several other works, including Scriptural Views of Slavery (1846) and The Way of Salvation (1863). A collection of his theological works was published in Philadelphia in 1875.

Strong’s Exhaustive Concordance of the Bible, generally known as Strong’s Concordance, is a concordance of the King James Bible that was constructed under the direction of Dr. James Strong. (1822–1894) It was first published in 1890. Dr. Strong was Professor of exegetical theology at Drew Theological Seminary at the time. It is an exhaustive cross-reference of every word in the KJV back to the word in the original text.

There are a number of great bible dictionaries in public domain, Some of them include Easton’s Bible Dictionary, and Fausett’s Bible Dictionary. E-Sword has 14 public domain dictionary modules. This program has 32 bibles including older versions like the Geneva Bible. It includes 9 Greek Manuscripts, 3 Hebrew Manuscripts, and the Latin Vulgate. E-Sword has ancient works as well. It has the writings of Flavius Josephus and the writings from the early church. all of the apostolic fathers works are included.

There are modern bible resources that are currently under copyright. The good news is many of these resources can be accessed and used online. The usual copyright stipulation is that the resources are for personal use. So the following are modern resource works that are only available for free on line

(Barclay was a brilliant Greek scholar, but he had some unorthodox views like universalism. Read with caution.)

There are many ancient manuscripts and books that are not included in the bible. The Apocrypha was written between the Old and New Testaments. There were 400 years that passed during this time. The Pseudepigrapha books are a collection of books that are false. There are around 54 of these books and they were all written under pseudo names. All of these books and many other ancient texts can now be read thanks to the internet. The links below will take you to many ancient books you may want to read.

The Truth About The Coming Global Currency Reset